Game On: How Mentos and Ice Cubes Can Make You a Fine Beverage Assassin 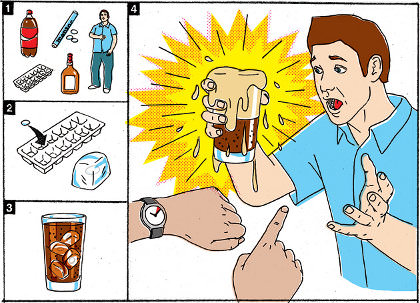 Most people have experienced the Mentos + soda experience. If you haven’t, the premise is simple: You put a Mentos into a glass or bottle of soda, and sh*t gets crazy and explodes. Simple, right?

But what if you want to use this technique to seek vengeance on your arch-nemesis? YOU’RE COVERED, because there is an old assassin’s trick perfect for this situation. END_OF_DOCUMENT_TOKEN_TO_BE_REPLACED 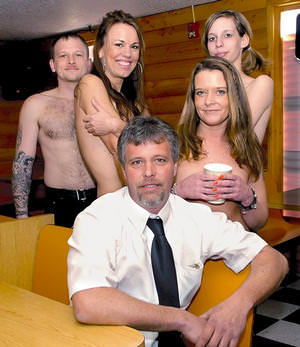 Bikini coffee shops have become popular in recent years, with some taking the concept “all the way” with coffee shops featuring topless servers, such as the Grand View Topless Coffee Shop in Vassalboro, Maine.

You have to be 18 years old to enter Grand View Topless Coffee Shop, and owner Donald Crabtree told CNN in February 2009 that business has been great, “It’s just been crowds mobbing in”, which is another example of fine beverage pitching in to help out the struggling economy. END_OF_DOCUMENT_TOKEN_TO_BE_REPLACED

As found in the Urban Dictionary, Energyology officially means “A term coined by energy drink expert Jeff Dorenbush, who invented the discipline of energyology, or the study of energy drinks.”

To use in a sentence, “My name is Jeff Dorenbush, and I’m a black belt in energyology.”

The definition was officially added to the Urban Dictionary on September 4, 2008, and has become a go-to term in the world of the Mutineer. Issue Four featured the first Energyology feature about the ingredients and nutritional differences between different popular energy drinks. Stay tuned for more great Energyology content to come…

Colbert vs. The Soda Tax

Patriotic journalist Stephen Colbert has entered the conversation on the proposed tax on soda to help pay for the obesity and health conditions that soda contributes to. END_OF_DOCUMENT_TOKEN_TO_BE_REPLACED

In the second of my non-alcoholic blog trifecta (cocaine isn’t alcohol people!), Pepsi is still trying to shoot down rumors that Pepsi released patriotic themed cans of cola after September 11. Ironically enough, I heard about this on Pepsi’s website, under the “false rumor alert” tab in the company section of the website. Does Pepsi have to refute so many rumors that is has a dedicated section of the website for it? Can I sign up for Pepsi “false rumor alert” RSS feed and get up to the minute false rumors delivered to my iPhone? Weirder yet, the rumors stem from as far back as 2001, yet for some reason are still being publicized on Pepsi’s site. END_OF_DOCUMENT_TOKEN_TO_BE_REPLACED 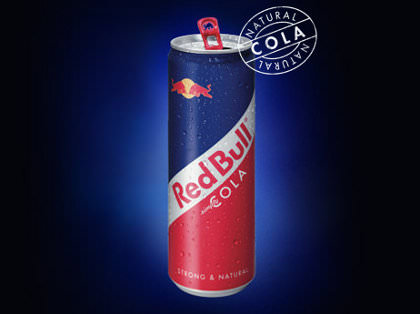 “The [Health Institute in the state of North Rhine Westphalia] examined Red Bull Cola in an elaborate chemical process and found traces of cocaine.” END_OF_DOCUMENT_TOKEN_TO_BE_REPLACED

McDonald’s To Drop the A-Bomb 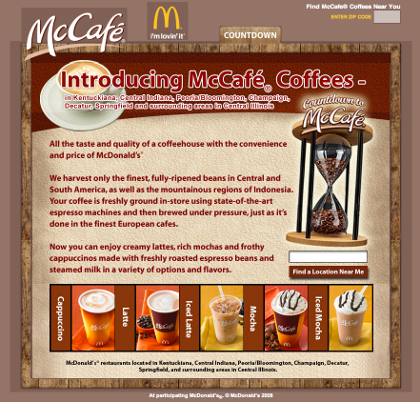 …the advertising bomb that is. McDonald’s is preparing to shoot America in the brain with propaganda about their new coffee line, McCafe. According to Advertising Age, McDonald’s is planning on spending $100 million on marketing, which goes to show that regardless of the recession, people gotta eat…and drink. The ambitious marketing effort makes this the biggest launch in company history, with an expected $1 billion in revenues coming from the new drinks.

According to McCafe’s website, the launch will start in roaring Kentuckiana and other Central Illinois areas and feature traditional American coffee fare including cappuccinos, lattes, and mochas.

Worried you’ll miss the launch? Doesn’t sound like it will be a problem. According to Advertising Age:

“I assure you that we’re going to be surrounding the consumer with very relevant messaging,” said Neil Golden, chief marketing officer, McDonald’s USA. He said the initial ads “will pulse on and off very strongly through the summer, with sustained weight well into 2010.” McDonald’s has already started the push with coupon booklets in newspapers for McCafé, which will initially include cappuccinos, hot and iced lattes and mochas, hot and iced coffees, and hot chocolate. McDonald’s will add smoothies and frappes to the line later this year and into 2010.

I’m sure the independent coffee scene isn’t looking forward to yet another equivalent of a knives vs. missile launchers battle in terms of trying to compete with these larger companies, and the only advice I can offer is to beat the big companies is quality and culture…and maybe fear and swords, like in The Last Samurai where the Samurai army defeats the army with guns…but I’d stick with quality and culture. Only three days to go until the Mutineer Magazine National Launch Party! The fine beverage tasting at the Launch Party will be a whole galaxy of multicolored sodas, along with the huge range of alcoholic fine beverages being poured. To achieve this, we had to break the mold of traditional tastings and bring in some products to mix things up. Enter Jones Soda, cover darling of Mutineer Magazine Issue 4 and makers of some of the most awesome soda in the world. END_OF_DOCUMENT_TOKEN_TO_BE_REPLACED