You can now get the new issue of Mutineer Magazine signed by Marina Orlova off of the Hot For Words website, in a unique opportunity to take your Mutineer Issue 8 experience to a whole new level.

Below are some articles you’ll find in the November/December issue of Mutineer Magazine:

Thirsty for Words, Marina Orlova
The star of “Hot For Words” takes the Mutineer cover to another dimension and explains the origins of some words from the world of fine beverage.

Mutineer Magazine Issue 7 is SOLD OUT! It’s true people! Mutineer Magazine Issue 7 has SOLD OUT. Done. Gone. So much so that Jeff had to use a heat gun to pull the subscription label off the only remaining copy in the office so we could give it to a loyal Mutineer reader. This is an outstanding problem to have as Issue #8 finds it’s way onto newsstands this week and next. Viva the mutiny! Oh yes…Mutineer Issue 8 is upon us, and I can’t tell you how PUMPED I am about it. For an overview of the issue 8 features, check out the preview post from last week.

The star of “Hot For Words” takes the Mutineer cover to another dimension and explains the origins of some words from the world of fine beverage.

Mutineer Beer Editor Brian Kropf explores the world of limited release beers, highlighting nineteen beers to be on the lookout for.

The legendary Randall Grahm of Bonny Doon tells all, from jungle animals hunting his staff in the vineyard to reinventing his approach to winemaking.

Brooke Smith compiles a stellar list of sparkling cocktail recipes from some of the country’s top bartenders for you to make during your holiday celebrations.

And much, much more… That’s right folks. The team over at Plumbline Studios has been officially recognized and awarded by Graphic Design USA for the graphic design work they have done for Mutineer Magazine. Mutineer Magazine can now proudly say it has award winning graphics in the magazine. You can check out our existing subscription artwork at our Mutineer Magazine Ads set on Flickr. We’ll continue to update the set with new subscription ads as they come out.

The Mutineer Magazine Newsstand Issue Locator…AKA “Where To Buy” 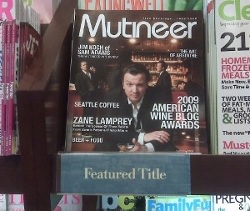 It has finally arrived! After much popular demand and a ridiculous amount of data entry by Energyologist Jeffrey Dorenbush, I present to you the Mutineer Magazine Newsstand Issue Locater, which is searchable by keyword and sortable by city, state, zip, or alphabetical by store name… cause that’s how we roll! Now you should definitely go out and buy the new issue!

Issue 7 Release Party, Mutineer on Tour, and Other Technical Problems As much as we love technology here at Mutineer Magazine, it always seems to turn on us when we hit the road. Our Powerbook has suffered a tragic and mysterious death, and all of our photos from the epic 2009 Wine Bloggers’ Conference and elsewhere are trapped in our camera until we return to our dependable desktop computers…but they are coming!

In other news, if you are in Los Angeles tonight, come by the indescribably cool Edison bar downtown for the Mutineer Magazine Issue 7 Release Party. Some of America’s top bartenders will be on hand mixing as part of the Radio Room series, which also happens to be the Issue 7 cover story! Synergy FTW! by JJ Bagley
The Edison in Los Angeles has established itself as one of American’s top bars, with bartenders flying in from around the country to participate in the incredible Radio Room. Discover the passions behind the creators of the Radio Room and get the skinny on who these star mixologists are in the Issue 7 cover story. END_OF_DOCUMENT_TOKEN_TO_BE_REPLACED