Lucky Devils, The Burgers and Beers 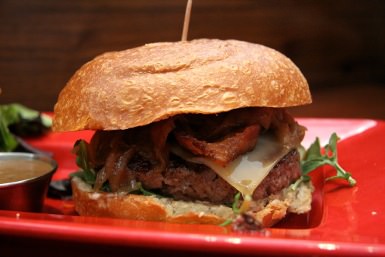 I have been eating lunch at Lucky Devils ever since they opened. This was one of the first places I found in Hollywood that had great food and great beers. Not only do they offer organic salads and veggies, but they also offer an array of sandwiches from the Lucky Burger (grass-fed heritage beef) to their Kobe Bacon Blue Burger. Lucky Devils is the perfect place for comfort food and a great beer. END_OF_DOCUMENT_TOKEN_TO_BE_REPLACED 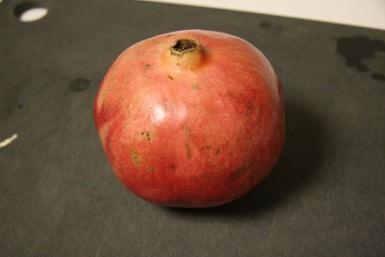 Yes, pomegranates are awesome. We picked one up to snack on the other night at the Mutineer HQ and decided to blog about it for people who may not be familiar with fresh pomegranate. There may be more “correct” ways to prepare a pomegranate, but this is what we did. END_OF_DOCUMENT_TOKEN_TO_BE_REPLACED 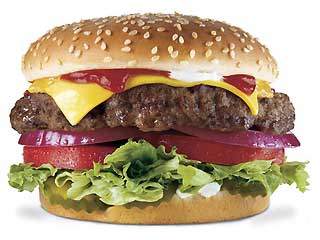 Do you feel like you have what it takes to make a great hamburger? If the answer is yes, you should call up the Blue Palms Brewhouse in Hollywood and sign up to be a “chef for a day”. Once a week Blue Palms offer you a chance to choose the ingredients for the burger, show Chef Domenico how it’s done and invite your friends to come in and enjoy your delicacy.

In addition, starting next year Brian Lenzo, owner of Blue Palms, is putting together a book called, “52 Weeks of Burgers at the Blue Palms”. This could be your chance for stardom, in the burger world at least. 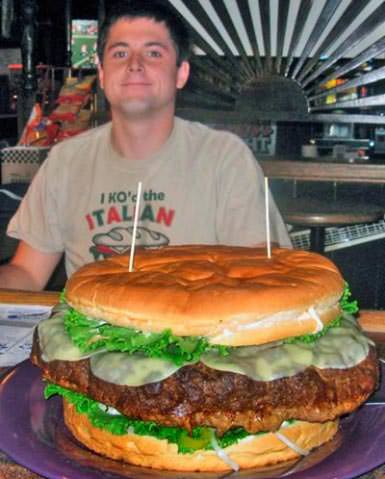 This guy ate this burger in a single sitting. It took him 4 hours and 39 minutes to finish the 15 pound monolith, which is a solid 2 hours quicker than my marathon time. The champion here is Brad Sciullo, who now has the sweetest picture ever to use on his personal ads. Mr. Sciullo is the first person to ever finish the burger, which is dubbed the “Beer Barrel Belly Bruiser” and served at Denny’s Beer Barrel Pub. END_OF_DOCUMENT_TOKEN_TO_BE_REPLACED 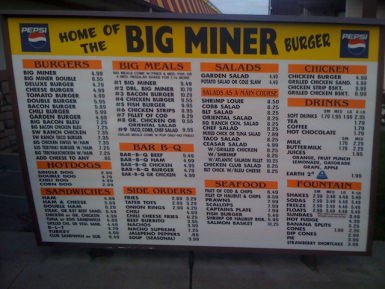 Something I’ve been wanting to do for some time is to have a Mutineer Magazine hamburger hall of fame. I’m convinced that it will happen at some point, but until it does, I’m limited to one-off tributes to the fine burger specimens I come across. END_OF_DOCUMENT_TOKEN_TO_BE_REPLACED I love Sportscenter, both the ESPN version and the awesome food and beer version in Yakima. The Mutineer Magazine crew moseyed over to this Yakima stronghold after the Yakima Fresh Hop Ale Festival concluded. END_OF_DOCUMENT_TOKEN_TO_BE_REPLACED

Seattle’s Pike Place Market is right up there with Starbucks, the Space Needle, and rain in terms of being a Seattle cliché, and rightly so as this place is a must visit for anyone making a pilgrimage to Seattle.

We checked out the market on our way to Pike Place Brewery, paying special attention to the renowned fish stand, “Pike Place Fish Co.”. This fish stand is famous for throwing fish around. No one was really buying fish, probably because of the economy, so we didn’t see any fish being thrown, but we did see the awesome fish on display for sale, and boy did they look amazing. Of COURSE Mutineer Magazine checked out the Yakima Farmer’s Market. Yakima is located in a region known for agriculture, and the farmer’s market did not disappoint.

The lemonade stand was a highlight, operated by Dimmick’s Cinnamon Toasted Nut Co., who also had delicious toasted nuts available to sample and buy. Another highlight was the honey table, which had honey that was still in the cone available to sample and buy. So you eat the cone with the honey. It was pretty awesome. END_OF_DOCUMENT_TOKEN_TO_BE_REPLACED