Not gonna lie, it does not take much to convince me to divulge in a fine glass of Single Malt Scotch. In fact, I can rarely ever come up with a good excuse NOT to drink fine beverages (after all, it is in my job description). However, when given a legitimate charitable reason, alcohol consumption becomes my civic duty.

The Balvenie, the world’s most handcrafted Single Malt Scotch whisky, recently announced that it is entering into a partnership with Slow Food USA™, a nonprofit organization dedicated to creating a world in which everyone can have access to good, clean and fair food. END_OF_DOCUMENT_TOKEN_TO_BE_REPLACED

Comments Off on The Balvenie Partners with Slow Food USA 06.03.2010 | Ashley Routson
Tweet As avid readers of the Mutineer blog, you all should know of the greatness currently going on that is Seattle Beer Week (American Craft Beer week started today as well). I was lucky enough to be in Seattle to catch the very beginning of #SBW2010 and I had the pleasure of attending a few events, one of them being the Firestone Walker Brewer’s Dinner at Collins Pub. It was originally planned to be hosted by Firestone Walker’s Brewmaster extraordinaire Matt Brynildson but for one reason or another it ended up being hosted by Firestone Walker Proprietor David Walker, which was a real treat as well. David was very friendly and outgoing as he talked about each beer and the story behind it and in between courses he made his way around the intimate dinner of 50 or so people and talked with everyone. Pretty cool. He wasn’t shy either with bringing out some insane beers that I can’t believe I had a chance to try. The food deserves mention as well as it was delicious and incredibly fresh coming from right down the street from Seattle’s famous Pike Place Market. Amazingly fresh local produce, the freshest seafood and beef, and all paired with out of this world beer. If you have the chance to attend one of their beer dinners in the future, I suggest you do your best to make it. In the meantime, here is the menu with some pictures of the one I experienced. END_OF_DOCUMENT_TOKEN_TO_BE_REPLACED I firmly believe that like Luke Skywalker and The Force, absinthe was destined for this recipe. Normally, I add a bit of white wine or lemon juice when making soup to balance the flavors. But here, the acidity they add only makes the soup taste like tin foil. In contrast, the cool smooth absinthe transforms this velvety soup, making it crisp and bright while still managing to stay rich and warming. Recipe after the jump. END_OF_DOCUMENT_TOKEN_TO_BE_REPLACED Our friends at STK are very excited about their holiday cocktails, and in the spirit of the holidays we figured WHY NOT SPREAD A LITTLE HOLIDAY CHEER.

As for us Mutineers, Energyologist Jeff’s idea of a holiday cocktail is eating candy canes and washing it down with Red Bull and tequila, Beer Editor Brian has a constant supply of holiday seasonal beers finding their way onto the counter, our marketing guru JJ is drinking Amarula Cream cause he can’t seem to get enough of the stuff, and I’m drinking whatever people put in front of me! Happy holidays fellow Mutineers! As the Hungry Mutineer I’ve been playing around with a recipe that has both freaked me out and interested me in equal parts; ham cooked in soda. It sounds strange, I know but trust me it completely rocks. I chose a natural cola from Virgil’s Micro Brewed Soda and cooked it up holiday style by adding a few fragrant spices. You can use whatever cola you like, just be sure it is real cane sugar [Jones Soda / Red Bull Cola]. This is important, an artificial sweetener will not produce the syrupy liquid that you will use for basting, plus it just tastes better.

Give this recipe a try for your holiday party, your hungry friends will thank you.
END_OF_DOCUMENT_TOKEN_TO_BE_REPLACED Just can’t get enough wine? Neither can we, so when I ran across Wine Sorbet Cafe at my local farmers market the sky opened up and the sun shone bright. Owners Mike and Cathy Kazmark were on site giving samples of this cool treat and I tried them all. Offering flavors such as Riesling, Rose, Sangria Rojo, Pinot Noir, Cabernet Sauvignon and my personal favorite Champagne. The ultimate dessert? For wine lovers very possible and for anyone that loves ice cream, sorbet, gelato or sherbet this may be your go to dessert. Check them out at winesorbetcafe.com 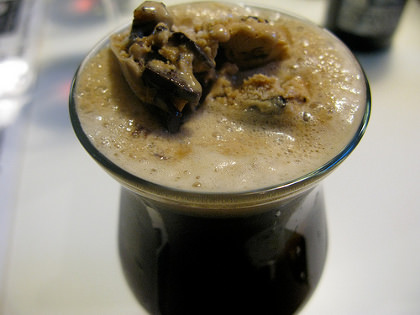 The LA Beer Float Showdown will be at the Blue Palms Brewhouse in Hollywood, California on July 26. The Golden State Café and BottleRock LA are squaring off to give Los Angeles a taste of how beer can be used in this special desert pairing. The Golden State Café began serving North Coast Brewing Company’s Old Rasputin Russian Imperial Stout with Scoops ice cream and was soon followed by BottleRock combining Brewery Ommegang’s Ommegang Rouge with Milk ice cream. END_OF_DOCUMENT_TOKEN_TO_BE_REPLACED 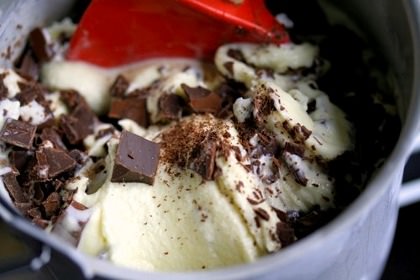 Writer David Lebovitz claims to be “living the sweet life in Paris”. As if I telepathically screamed “Prove it!” in his face, he has a recipe on his blog for Absinthe Ice Cream.

You win, Mr. Lebovitz, you win.

A genius of sorts, he has somehow combined the world of alcohol, specifically absinthe, with ice cream. This man would be a king in America; the Robert Parker of Baskin Robbins, the Steven Tanzer of Cold Stone Creamery, the Steve Heimoff of…wait, who? END_OF_DOCUMENT_TOKEN_TO_BE_REPLACED