RoboBar: How to send 99% of Hollywood’s Struggling Actors Below the Poverty Level

This thing straddles the line between terrifying and the coolest thing I’ve ever seen. RoboBar is a new robotic bar that comes in three models: a high-entertainment model, a high production model, and a non-alcoholic model. END_OF_DOCUMENT_TOKEN_TO_BE_REPLACED 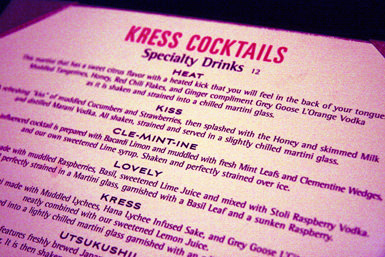 Mutineer Magazine writer Natalie Hall attended the grand opening of Kress and here are her thoughts:

When you walk through the front doors, it makes quite an impression. The place is huge, I mean huge. The Kress is a multi-level restaurant, club, lounge, and banquet hall. As you walk in, you see an enormous round bar with a gorgeous abstract chandelier, flanked all around with banquettes designed in that opulent French-Asian Victorian thing. I see two things: the waitresses with trays of fancy-schmancy cocktails, and a buffet of appetizers. (Score!) END_OF_DOCUMENT_TOKEN_TO_BE_REPLACED 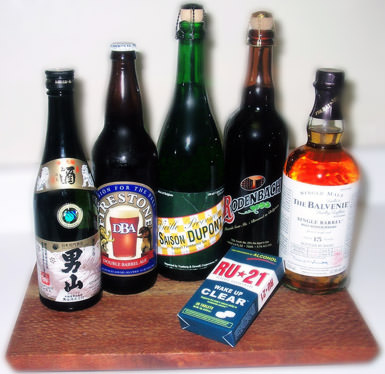 Over the years I have heard many different remedies for hangovers, from the “George W. Bush Preemptive Strike” of two Advil when you pass out and two Advil when you come to, to the “Oh shit, I’m hung-over. Let’s go eat a greasy breakfast.” And my favorite (though untried) beer with raw egg yolk and Tabasco. I was on my way out of my favorite beverage shop, Vendome, standing at the counter, when I spotted my next mission in front of me.

END_OF_DOCUMENT_TOKEN_TO_BE_REPLACED 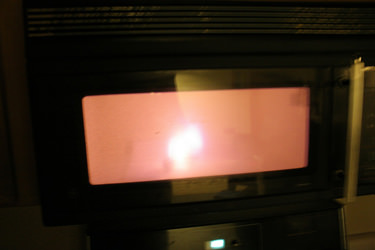 I am here to report that after only 2 weeks of being in the new Mutineer Office, there has been an incident of office drama. The incident stemmed from JJ bantering on about how he doesn’t eat things cooked in the microwave, and then Alan microwaving a lightbulb. Alan claims that it’s a misunderstanding, though JJ is certain Alan is trying to sabotage the office and ruin his microwave. Stay tuned…

The Mutiny has truly begun…The new Mutineer HQ has been completed and operations have begun in our new lair. Located in West Hollywood, it will allow us to better serve our readers (as well as host some compelling after parties). Everything is “mutineer red” and black, inspired to look like an old Black Panthers HQ meets a James Bond 007 Villian’s secret layer. It’s pretty overpowering and stressful to sit in given the overload of red and black, but I’m hoping we adjust and are able to keep it this way.