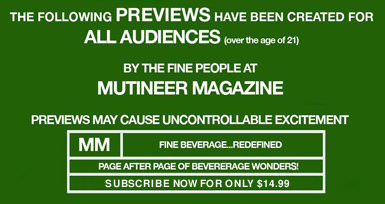 You may have noticed a drop in blog posts last week on the Mutineer Blog. This is because we were feverishly working around the clock to finish the April/May issue of Mutineer Magazine, which will be the first issue of MM nationally distributed at bookstores and newsstands across America.

We’ve taken the magazine to a whole new level, with top-notch stories and an improved layout; the Mutineer Magazine vision is really starting to come together. If you are already a subscriber, you should receive your copy in the next week or two, and if you aren’t a Mutineer Magazine subscriber, then you should head over to our subscription page and join the mutiny!

Here is a preview of the features in the upcoming issue:

by Chess Katier
Chess tells his own story of leaving behind a dark life of drug dealing to pursue a career as a wine horticulturist. With illustrations by Seattle artist Hunter Lea, this piece will be unlike anything you’ve ever read in a wine magazine.

We surveyed 16 spirits blogs on questions ranging from absinthe to the ultimate orange liqueur in a margarita. You’ll be surprised by the answers.

by Erin Jimcosky
Erin Jimcosky explores the independent coffee scene of the Seattle area to capture the experience of some of the world’s most inspired brewhouses.

For the first time ever, the American Wine Blog Awards results will be published in print. Check to see if any of your favorite blogs won, and check out anyone your not familiar with!

Jim Koch of The Boston Beer Co./Sam Adams gives a no-holds-barred interview with JJ Bagley about the rise of Sam Adams, the craft beer scene in general, and Koch’s signature hangover cure.

Special Report: Drinking My Way Around the World

Haven’t subscribed yet to receive your copy of Mutineer? Subscribe here.