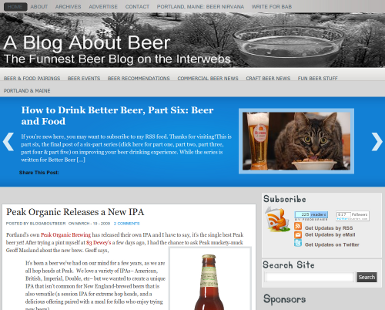 In Mutineer Magazine Issue 4 we highlighted six beer blogs that you should be reading. Here is the third of six full interviews with those bloggers.

What inspired the Blog About Beer blog?
I hate to admit it but I got into niche blogging like a lot of people do – I was looking for a “get rich quick” way to making money online and thought that blogging was it. I chose beer because it was one niche I thought I knew something about. As it turns out, I was wrong on both accounts. The blog is certainly not making me rich and I quickly learned — at the time — that I didn’t know squat about beer. But despite all of that, I quickly started to become addicted, in a way, to blogging and my passion for both the blog itself and more importantly for beer really started to explode. I think it’s pretty evident, too. If you look back at some of my earlier posts and designs for the site, they were complete shit. But once I realized what I was doing, my writing improved and my beer appreciation began to grow; and consequently the quality of the blog improved immensely. Which was reflected in the growth in readership, RSS subscribers, press, etc. And I would like to think that the quality of BlogAboutBeer.com continues to — and will continue to — improve every day.

Tell me more about the comedy angle of the site.
The comedy angle of BlogAboutBeer.com just sort of happened, I hadn’t really planned it that way. I just started to write about or mention things that I found interesting personally; things I thought other people would find interesting, too. While I certainly wanted (and want) to share my opinions — what’s the point of working hard to publish your own material if you don’t share your own opinions — I didn’t want the site to be dry or mundane. I think a large part of what differentiates my site from other beer blogs, and what continues to make it a destination for readers is the unique, fun content I share. Most of which is just inherently comical.

What is your vision behind the blog?
So many of the other well-known beer blogs out there are very literary in tone and style, which is all well and good and definitely has its place, but it’s not my style. I try and get deep down to the root of what’s behind the beer I love – the social and fun aspects of what makes beer drinking what it is. I try to keep my writing and my content light-hearted and fun, just like the beer itself.

While I obviously write almost exclusively about craft beer — because I drink almost exclusively craft beer — I try and keep in mind that many people who come to my site might not have that inherent knowledge of Better Beer (at least not yet) that a lot of other sites assume they have, so I do my best to cater to them as well. But most of all I guess it’s about the fun. I want any reader who comes to my site, regardless of their prior knowledge of beer, or even how much they really care about beer, to have a good time while they’re there. And hopefully they’ll continue to come back.

Why should people be interested in the blog?
People should form their own opinions on why they’re interested in my blog. I realize a lot of the fans (and authors) of some of the literary beer blogs out there that I mentioned before might be disappointed when they come to my site because I’m not here to wax philosophically about the beer I write about. Some people are into that, and that’s great, but I look at my site personally as a welcome respite. I don’t take the beer or myself too seriously. That’s wine’s job. I would hope, anyway, that people would be interested in my site because it’s fun and light-hearted, just like beer itself.

What qualifies you to write this blog?
Nothing. Haha. Well, nothing beyond my enjoyment of beer. But I’m certainly no insider — beyond the press releases and samples and things that are sent to me — or professional. But I think that goes along with the vision and theme I’ve been mentioning. I’m not attacking the subject matter from the perspective of an industry insider or professional, I’m attacking beer from the prospective of a beer drinker, and I try and keep that in mind with everything I publish.