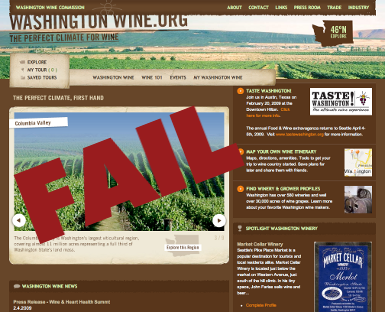 Today was supposed to be awesome. I was excited to write about the Snipes Mountain AVA gaining official status but ended up spending my day trying to figure out how and why the Washington Wine Commission could botch this up so badly. I posted a blog about it earlier today and have already had two Washington wineries contact me after reading the blog to vent about WWC dropping the ball on the Snipes Mountain AVA as well as past ball droppings.

I really don’t want to make enemies with the people at the WWC, but as a responsible journalist I feel compelled to bring to light my dealings with this organization, that according to their website, “The Washington Wine Commission is responsible for the promotion and development of the Washington wine industry, representing more than 580 wineries, 350 wine grape growers and 31,000 vineyard acres.”

My frustrations begin with the fact that we have moved Mutineer Magazine to Washington State to explore and share the stories of the region with our readers. I have reached out to the WWC three times over the last two months without hearing so much of a reply from the organization. They say they are “responsible for the promotion”, but that hasn’t been my own experience in dealing with them. I’ve even had someone who is familiar with the WWC contact them on my behalf, though I have yet to hear from them.

I ended up trying six extensions at the WWC today trying to get information about the Snipes Mountain AVA, only to find my way into the voicemails of all of them and then realizing I was setting myself up for a theoretical onslaught of returned calls. It is several hours later and I have had one returned phone call from “Senior Communications Director” Ryan Pennington, who said that the Snipes Mountain AVA is “Something we’re still exploring and getting details about.”

Okay, for all of you non-wine geeks out there, an AVA is an American Viticultural Area, which basically means a wine producing region. Establishing a new wine AVA is NOT breaking news, it is a slow, tedious, bureaucratic, red-tape, snail’s pace, process regulated by the Alcohol and Tobacco Tax and Trade Bureau. What is there to “explore”?! I mean, Wikipedia already has an entry for the Snipes Mountain AVA. The WWC could contact the people that set it up, or the newspapers that have written about it, or the BLOGGERS (!) that have written about it, or the Alcohol and Tobacco Tax and Trade Bureau, or, and I know this sounds crazy, the WWC could send one of its thirteen employees over to the region to collect first hand research and images. I even offered to drive the four hours over there myself today to do it for them, but I don’t see the WWC taking me up on this.

This is as huge as news gets in the wine world. The Washington wine landscape has changed. There were only nine AVA’s to begin with, now there are ten. How this doesn’t end up on the WWC’s radar BLOWS MY MIND.