A Letter To Steve Heimoff 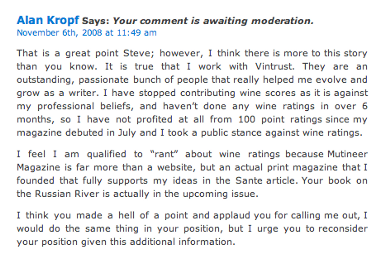 Because Mr. Heimoff has chosen to not post my comment on his blog which attacked us today, this is my response to him.

Today I received several e-mails about a blog you posted titled, “If you knock ratings, then don’t rate wines!”, which basically attacks the integrity of Mutineer Magazine and myself directly.

I have invested everything I have into Mutineer Magazine, and while I welcome constructive criticism, I will not stand by and have you make false accusations about me or my magazine.

My first issue is that only one comment has been posted in regards to this blog. I’ve posted a comment, as has my roommate, as have other people that have e-mailed me out of anger that this was published, but none of these have been posted. You are a well-known writer with a well-known blog, and there is no excuse for publishing a negative and controversial blog without allowing people to comment. If you were planning on being away from a computer for an extended amount of time, you should have waited to post this blog until you have returned. Clearly you are not serious about your blog.

I question your own journalistic credibility, as you say that the research you did for this blog story consisted of: “I did a little Googling on Alan Kropf…” Transparency is extremely important to Mutineer Magazine, and as such we have all of our contact information on our website, and I would have happily talked to you about the magazine’s vision and any questions you had about my activities or ideas. If Mutineer Magazine had the same standard for research that you did, my job would become a lot easier.

Instead of doing actual research, you chose to irresponsibly post this story, oblivious or unwavered by the consequences it could have for Mutineer Magazine. Thankfully there are enough people out there who have taken the time to understand Mutineer Magazine that I doubt people will take this seriously. And based on e-mails and Twitters I’ve received about this, your credibility is the one that has taken a hit.

“you have assembled a nice “gotcha!” point, but you are aiming at the wrong target.”

“I do not know Alan Kropf, but I do know that if I want to pass a judgment on him, I will base it as much as possible on things in his control, namely the Sante article itself (spot-on!) and Mutineer magazine (will check out soon).”

“And Judging by Alan Kropf’s article in Sante, he is a sane, honest wine expert who is trying to make a difference. I think we should pay attention to the message he controls, not the superimposed numbers that he can not.”

The best part of this comment is where the commenter gives you advice on how to do your research, “Perhaps if you contact the SOMM editor directly, you can get a better platform to discuss ratings anew. But as of now, all you succeeded in doing is tarring a colleague based on a policy set by an employer.”

This is my favorite part of the blog:
“Let me get this straight. The editor-in-chief of Mutineer says ratings are irrelevant and must be transcended. Then he reviews wines (for profit?) for a magazine that uses the 100-point system.

Just once, I’d like to meet someone who bashes wine magazines and doesn’t seem to have an ulterior motive — making money. Hasn’t happened yet.”

Did I use to write for Vintrust? Yes. They are a wonderful company that I was proud to be a part of, though I haven’t written wine reviews since I launched Mutineer Magazine. So, unlike you say in your blog, I do not rate wines using the 100 point system. Vintrust was my first writing gig in my transition from being a Sommelier to a writer, and it is my experience that you must first learn the rules before you can change them, so writing about wine per Vintrust’s guidelines was something that was a part of my development as a writer. You should also consider that Vintrust’s SOMMSelections is not a traditional consumer beverage publication, but rather a trade publication with an emphasis on higher end wine and collectors.

I feel my claims about my vision are substantiated by the fact that I walked away from my sommelier career and started a print magazine to support my ideas. This project is my career and my passion, and you have taken ignorant pot shots at it. It is irresponsible journalism that misinforms the people that read it, and I would expect more from such a well-known and respected wine writer. Shame on you.