Crystal Pepsi: The Most Futuristic Beverage Ever 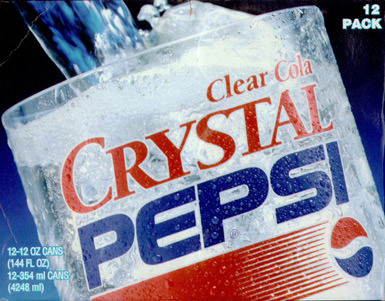 I can say with confidence that Crystal Pepsi is one of the main consumer products that defined my childhood (that, Ken Griffey Jr. Crunch Bars, and hypercolor shirts). In my childhood home of Waterville, Washington, summertime temps would get up around 110 degrees, so having a quenching beverage you could rely on was crucial, and at the tender age of ten, this palate was already becoming particular about what it wanted.

Crystal Pepsi followed an early 1990’s marketing trend of “clear products”. In, 1993, Crystal Pepsi stepped up its game with a commercial during the Super Bowl (Go Bills!), with Van Halen’s “Right Now” featured in the commercial. Times were good for Crystal Pepsi, and Coca-cola soon rode Pepsi’s coattails by developing its own clear cola for old people, called “Tab Clear”.

Like most great things in life, Crystal Pepsi left far too quickly. After a roaring first year of sales, Van Halen refused to license any more songs for Crystal Pepsi commercials, and Crystal Pepsi went under soon thereafter. In a move that has since been replicated by the Wine Spectator on a monthly basis, Pepsi just repackaged the Crystal Pepsi as a new awesome drink with a citrus flavor, and called this “new drink”…wait for it, “Crystal By Pepsi”, which also flopped.