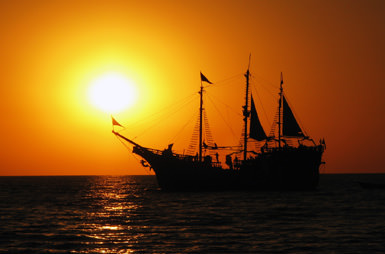 Many years ago, before the Panama Canal and Next-Day Air shipping, sailors had to actually forge across the great seas. Of course, one of the most important items aboard was ale. Now imagine the most salty, sultry, and savage environment possible and picture yourself hauling this precious cargo, only to find it spoiled and undrinkable upon your arrival.

To solve the spoiled brew problem, a brewer decided to add huge amounts of hops, a natural preservative, to his brew and increase the alcohol content. Shazzam! India Pale Ale. The hop content in this new style was enough to keep the microorganisms at bay and cover any oxidation. No more sober, sad-faced pirates.

This brings us to American IPA’s and the huge success of this craft beer. IPA’s have taken over the American craft brewing market as of late and have reached levels of IBU’s, International Bitterness Units, that science tells us we cannot even taste any longer. Strong and bitter, in a good way, and hugely popular, one of the best known Stone Brewery’s IPA is brewed in Escondido just outside San Diego. This is a good example of an easy to find American IPA. You will either love ‘em or hate ‘em; the distinct and recognizable flavor of the hops is too much for some, yet others can’t get enough. Pilfer your local supermarket and you’re sure to have many choices. Find something from SoCal and see what side of the fence you’re on.