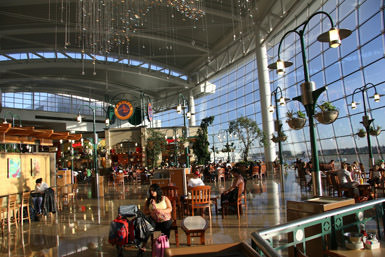 I used to love airports. They conveyed an excitement to me that meant an adventure was coming. That excitement has turned to burden as I have entered the ranks of business travel, and as such I have begun to appreciate the amenities one can find in the modern airport. Of all airports, one stands out as being exceptional, and that is Seattle/Tacoma International Airport (Frankfurt is the worst).

After undergoing a somewhat recent remodel, the main concourse more closely resembles a posh Las Vegas casino than a typical airport. As you leave security, you enter a cathedral of a space full of dining and shopping options, with the far side being a massive (and I mean massive) glass wall overlooking the runways of SeaTac. 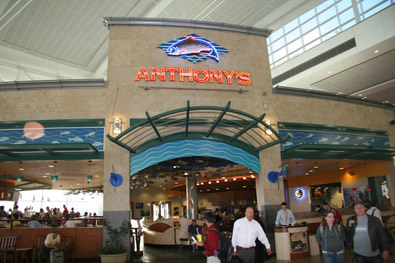 On my current trip from Seattle to Los Angeles, my flight has been delayed an hour and a half, but no worries, as I can kill that much time and more at Anthony’s Restaurant located in the heart of this dining area.

Anthony’s is something of a seafood institution in the Puget Sound area, walking a fine line between casual and fine dining in way that seems to always be what you’re wanting it to be on that particular night. Featuring fresh seafood and local strawberries in the summer months, my family has been dining at Anthony’s since time immemorial.

Tonight I begin with Anthony’s signature bay shrimp cocktail, followed by pan fried oysters, ending with local strawberry shortcake. All of this is paired with local Olympia Fish Tale Pale Ale, with matches beautifully with the fried oysters.

The airport version of Anthony’s is definitely a slimmed down version of the traditional locations, but still Anthony’s, and still definitely worth checking out.