Root Beer with a Twist 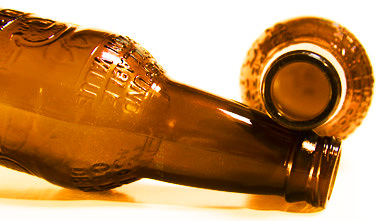 I created this mixture out of boredom and, well… we didn’t really have anything else in the office in the order of cocktail ingredients. We only had Skyy Vanilla Vodka and a party keg of Virgil’s Root Beer. While Wine Mutineer, Alan Kropf, watched in horror, I lifted the experiment to my lips. To my pleasant surprise, the concoction actually was a resounding success.

I was excited to experience, perhaps for the first time, obvious, separate notes of flavor in a mixed drink. The root beer swims in first with a sweet, vanilla after taste. There was subtle evidence of the presence of vodka. Many two-ingredient drinks (like rum and Coke or vodka tonic) contain enough liquor to make me wince, but despite having the same amount of spirits, the RBT (just shorten it) simply made me giggle.

Pour ingredients into a small glass filled with ice and stir. Garnish with a maraschino cherry.