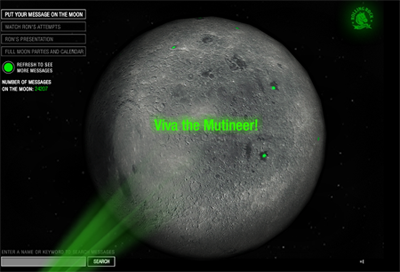 Mutineers do things their own way, and when I heard about Rolling Rock beer’s attempt to advertise on the moon, I was intrigued.  No, they haven’t actually advertised on the moon as of yet, but they have managed (or so they claim) to destroy Mt. Fuji.  They call it “moonvertising” and it involves shining a massive green Rolling Rock logo on the moon.  Rolling Rock has been generous enough to share their pseudo-technology with us to help get the message of Mutineer Magazine out to the world.   (Actually, anyone can get a message on the moon, we just like to feel important).  So cheers to Rolling Rock, and viva the Mutineer!