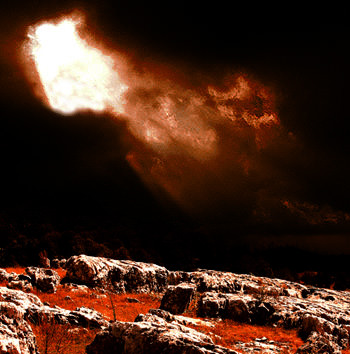 By tomorrow we should all be celebrating the success of NASA’s Phoenix Lander, due to set down near Mars’ North Pole in the late afternoon.  Ramp up is set for 4:30pm and the automated landing process is expected to last about an hour.  This marks one more hurdle leaped by NASA, but more importantly lines us up: right on time to discover faster than light travel later this century.  Oh yeah, I’m talking about April fifth, 2063, when Zephram Cochrine will launch his Phoenix Warp Ship and become the first human to break the subspace barrier.  For a second, the Star Trek time line was beginning to look a bit flimsy-no Eugenics Wars with human clones in 1999?!-but watching the artistic animation of the Mars Lander today inspired me to celebrate my nerdiness by kicking back with a Romulan Ale.  Ugh!  These things should be illegal!

Combine ingredients in a one liter bottle and freeze overnight.  Serve as shots.  For extra Trekkieness, tell your friends it’s a Kali-Fal (Romulan Pronunciation)